I was about 5 or 6 years old when my family got an NES, complete with the Super Mario Bros./Duck Hunt cartridge. The story goes that I spent 45 minutes repeatedly dying on the first Goomba when my father eventually sat down on the couch behind me behind me, probably just to see how long this would go on. At some point I asked him if he could help me get past that first guy. I could totally take it from there.
He took the controller, beat the entire game, and handed it back to me. Mom remembers hearing my squeaky little voice from the other room.
"I won!"
A lifetime of being gleefully terrible at video games followed, but in the years that followed there was a blessed piece of plastic that could help little scrubs like me get through the games their parents had so generously rented at Blockbuster. 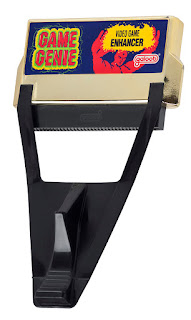 Behold the Game Genie.The OG Steam Workshop. You latched this thing onto your game cartridge, jammed it into the NES and suddenly Teenage Mutant Ninja Turtles wasn't an impossible nightmare factory! I'm totally comfortable saying that the Game Genie is responsible for a lot of my fond memories of early video gaming. Challenge is fun and all, but slamming your head into a brick wall is not. Besides, the Genie could only change a few things on each individual game, so it's not like all of the challenge was taken out. Some of the older kids in the neighborhood had even figured out how to program their own codes with the help of the big guidebook that came with the Genie.

As a plastic gizmo you put on the end of your cartridge, the Game Genie would physically sit between your game and the Nintendo system hardware. As the court noted, the Genie would block communication between the game and the system, so when a value would want to change because you did something - like, oh, I don't know walk directly into a bed of spikes because who could possibly guess that those would be instant death - that would want change the number of lives you had from 3 down to 2, the Game Genie would get in the way and tell the system that you still had 3 lives. From an historical perspective, this was kind of the beginning of readily available mods for home video games
The Game Genie was limited, though. First of all, it couldn't make any permanent changes to the programming of the game so any effect it had only lasted until you turned the system off. Second, it didn't really do anything on its own, so you needed to already have a Nintendo cartridge for the Genie to attach to for there to be any real substance to it. And lastly, the Game Genie only let you make these temporary changes to 3 data values in the game, so its effect on the program was limited even when it was being used.
Fast forward a few decades to my law school days and all those fond memories rushing back to me when I see we have a case about the Game Genie assigned to us as homework. We were given the case of Lewis Galoob Toys, Inc. vs. Nintendo of America Inc. from 1992, and in it I found that not only was NOA once a devil trying to take away my joy, but also that at ton of the stuff the legal system actually figured out about video games is now barely relevant.

The 9th Circuit ran the facts through the analysis of a few core principles: "derivative works" and "fair use." You could write a 1,000 page textbook about each of them and still not totally pin down their meaning, but limiting our view to the Galoob case might help us get a grip on the basics of derivative works and why those basics might have outlived their usefulness.
Nintendo argued that the Game Genie infringed on their copyrighted games by altering their display and people play them in a way that the programmers hadn't intended. This matters because the Copyright Act of 1976 says that the party who holds a copyright is the only one who gets to create or allow others to create derivative works of that copyrighted property. It's just as blunt as you think it is. Under a law that was drafted the same year Jimmy Carter won the presidency and "Frampton Comes Alive" topped the charts, you supposedly need the authorization of the people who hold the copyright before you can make a derivative work. Of course, this gets modified by fair use doctrine, and we'll have another case to talk about that, but you're gonna be pissed when you find out what counts as a derivative work that supposedly can't exist without someone else giving their permission. It's a huge definition.
Straight from the statute, a derivative work is something that's based on a work that already exists, with examples being "a translation, musical arrangement, dramatization, fictionalization, motion picture version, sound recording, art reproduction, abridgment, condensation, or any other form in which the work may be recast, transformed, or adapted." And before we try and find a safe haven for commentary or criticism, be warned that "a work consisting of editorial revisions, annotations, elaborations, or other modifications which, as a whole, represent an original work of authorship, is a "derivative work.'"
So all the stuff you like is a derivative work. It's not supposed to exist. The amazing Attack on Titan fanart you've been showing your friends? Derivative work. The adorable 10th Doctor plushie you got on Etsy? Derivative work. "A Very Potter Musical?" Derivative work. Rifftrax? Derivative work. That Speed Racer high school AU fanfic sitting on your hard drive in the folder marked "Shame?" Derivative work. 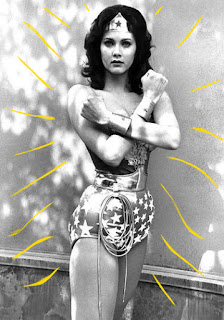 This picture of Lynda Carter as Wonder Woman that I spent 2 minutes drawing yellow majesty lines on? DERIVATIVE WORK!

This is especially weird coming from the courts considering our whole system of legal analysis is based on the idea that there is nothing new under the sun and you can't make an argument to a judge without citing old case law.The law's blind spot about itself notwithstanding, the US obviously doesn't enforce this extremely strict ban on people making derivative works without permission, so what do we actually need to remember from this case?

The thing to remember is that the Game Genie made it through the court system alive because of the following features: (1) it was a physical object that needed another physical object to function, (2) it doesn't keep any of the actual Nintendo programming content on the Genie itself, and (3) it wasn't replacing Nintendo games on the market because it couldn't do anything without the game.

"...Who cares? We barely use physical objects anymore when it comes to software, so using this case to think about modded video games is pretty pointless. This is an outdated case and you just wanted an excuse to talk about the Game Genie because you're old!"

I'm not saying you're totally wrong (personally, I like to think of it as finally aging into my own personality), but here's the kick in the ass when it comes to the law: old stuff matters. You've heard of the Digital Millennium Copyright Act, and you'd be forgiven for thinking that it was the only Copyright law that mattered these days considering how much press time it gets. But you would be wrong. The DMCA was just an expansion on a series of copyright laws dating all the way back to 1790 that still have power over us. We still have to care about the restrictions people put on our creativity back when "Charlie's Angles" was brand new.

So that's derivative works. It's possible to not get caught by the definition, but most of the stuff we've seen on how to not get caught is outdated and doesn't really help us. Thankfully, the fun Internet's lord and savior, The Fair Use Doctrine, is still out there, and someday soon we'll start scratching the surface of that topic.

But before that, let's move a little closer to our present day and learn some more about the hazy law swirling around people modding their video games. Next time we'll be talking about level editors, chapter 1 of Duke Nukem's tortured relationship with the courts, and a judge that you will absolutely want to have a beer with after you learn about him.
Posted by ErisSaid at 9:25 AM

Promote Your Page Too